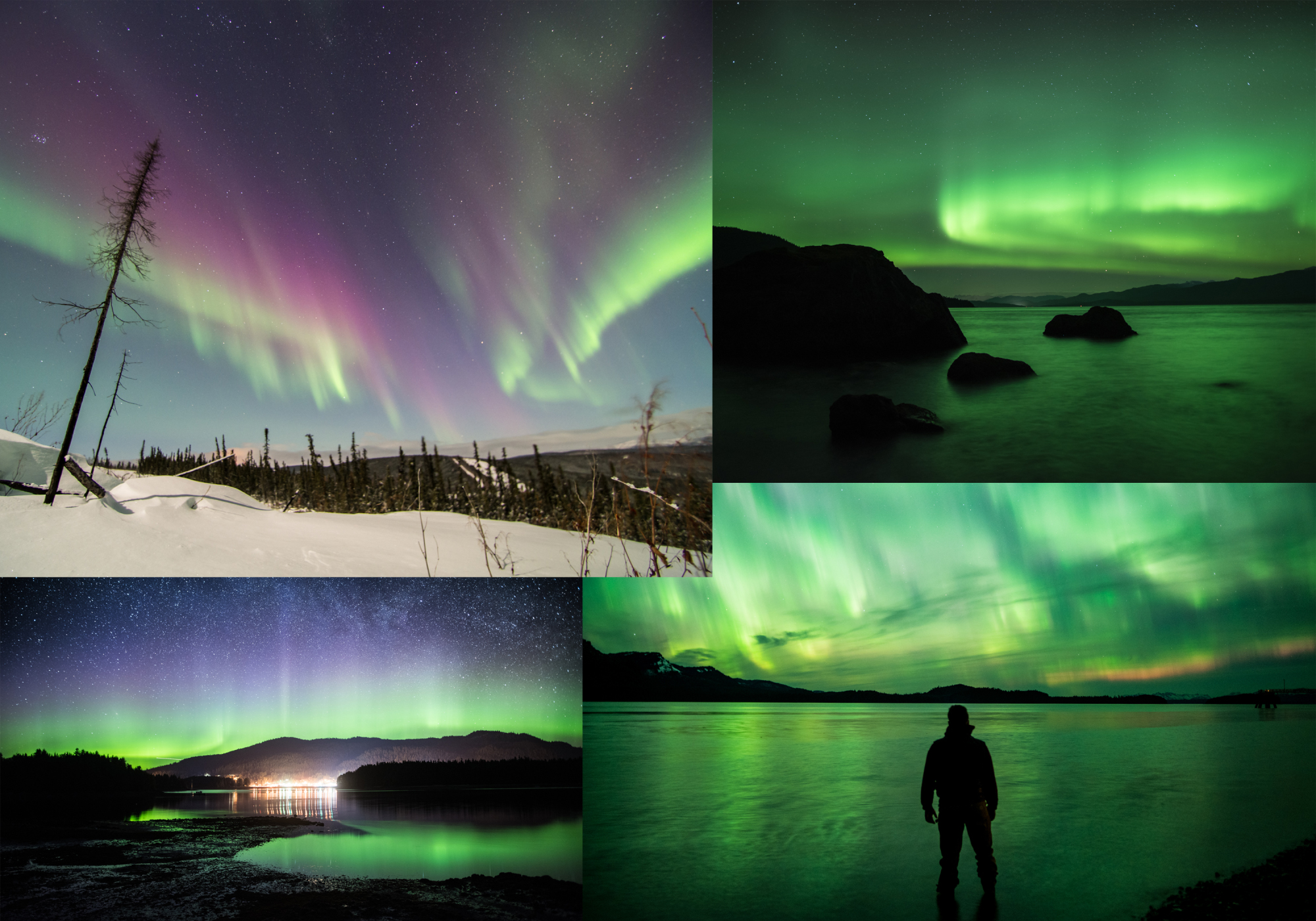 In the images above, I minimally edited the Aurora and was sure not to over-enhance it. Understanding how the Lightroom slider controls impact your Aurora shots can help you achieve natural and beautiful edits of the Aurora Borealis.

Advancement of digital cameras and photo editing software has created an incredible opportunity to edit your shots after a night out under the stars and Lights. The advent of post-processing technology has, in my opinion, resulted in many Aurora photographs which are over-processed to bring out rich saturation and contrast that did not exist in the original scene. Because many of the middle tones (colors) of the Aurora are so pure and contrast so highly with the sky, it is easy to eject the equivalence of pixel-steroids into your image giving them a false look.

It is my goal when editing Aurora shots to enhance but not over-enhance. Understanding how each of the basic Lightroom editing tools impacts an Aurora image can help you tell the story of your night out by making your image look like they did when you saw them.

To illustrate how the Lightroom basic sliders (contrast, clarity, dehaze, tint, saturation, vibrance, shadows, highlights) affect an Aurora image it is easiest to look at how extreme values for each setting impact the image. For each slider type, I will walk you through how the slider impacts any image (i.e., the definition of the slider). I will apply it at extremes to the same Aurora image to show a before (no edits) and after (extreme applied) comparison.

Contrast is a very useful slider and a fundamental one for editing. By definition, the contrast tool darkens the darkest mid-tones in the image and lightens the lightest mid-tones. In an Aurora image, many of your mid-tones are going to be in the Aurora itself. So, you can see as you slide the contrast to 100% that the colors in the Aurora darken giving the image a more saturated look.

The clarity slide adds contrast in the mid-tones without adding much noise. The tool is often used to bring out texture and details. Again, Aurora colors fall into the mid-tones of your image, so a clarity boost impacts them strongly. Boosting clarity to +100 creates definition in the banding of this Aurora shot because there are vertical dark lines of the sky in the Aurora. You may like the clarity slider for Aurora shots because it doesn’t add as much contrast as the contrast slider does and can make stars in the image pop and seem crisper.

Similar to clarity, the Dehaze slider increases midrange contrast and shadows giving the images a slightly dark and more saturated look. However, the Dehaze slider was built to remove fog from a scene. When you apply its technology to an Aurora shot, it adds a lot of contrast and saturation to the image. This is a slider to use gently (if at all) for Aurora image editing.

The saturation slider globally (for the whole image) deepens, intensifies, and brightens the color. In an Aurora image, you will find it is very, very easy to overdo the Saturation of an image. So, use Saturation sparingly. When slid to +100, it turns the Aurora to an almost neon appearance. At -100, it strips all color from the image. There are times when bringing the saturation out of your Aurora image by -5 or -10 can help improve the appearance of the image and make it easier for the eye to comprehend.

Vibrance is the “less aggressive” form of saturation. It’s a smart tool that increases saturation and tones in more muted colors. In Aurora shots, the Vibrancy slider focuses on the Aurora and provides a more realistic enhancement of the colors. You can see in the examples below there is still danger in over-using it. A vibrancy value of +100 creates neon colors similar to overusing saturation. However, at -100 you can see there is a distinct difference from -100 Saturation. The -100 Vibrance does not remove all color from the Aurora.  You may find it a powerful technique to decrease your saturation slightly before increasing vibrance.

The Shadow slider increases luminosity in the darkest parts of the image. With a picture of the Aurora, you have a distinct advantage in that the Lightroom program interprets almost any part of the image that is not Aurora to be a shadow. So, you have the power to lift or darken your foreground very easily. You can see in the +100 shadow example below, details were brought out of the shadows in the silhouettes of the trees

The Highlights slider increases luminosity of the brightest parts of the image. As I describe above, Lightroom interprets any part of the image with the Aurora to be a highlight. That means an increase in the highlights to +100 effectively increases the exposure of the Aurora. If you over-expose an Aurora image in the field, decreasing the highlights can help you reclaim lost detail.

The Tint slider is a meant to be used for color correction in correspondence with the temperature slider. You can use the tint slider to neutralize the snow which tends to turn green during intense Aurora outbursts. Use a Graduated Filter, coupled with increased pink tints and decreased saturation, to return your snow closer to white. Often, this helps your eye focus on the Aurora and can restore balance to the shot.

Putting it all together for a final edit

Now that you know how each slider impacts your overall image, its time to combine each in moderation to achieve a final edit. In the edit below I wanted to make sure the banding in the Aurora was enhanced along with the purples of the “sun-kissed”Aurora. My final edit brings out features of the image without over-enhancing it.